A couple of weekends ago, I had the pleasure of attending my very first IMATS Toronto 2014. Having heard of this legendary event through various bloggers, YouTuber’s and industry professionals, I felt that it was my duty as a beauty blogger to attend the event, learn new things from the pro’s, and purchase new tools / products from the various exhibitors that I would not normally have access to.

The event took place at the Toronto Metro Convention Centre. As soon as the doors opened, the sight of hoards of girls running towards the various booths and exhibitors really reminded me of the Hunger Games. I had a little moment of being overwhelmed due to forgetting my list at home ???? I know right, who does that?

The primary goal of the event seemed to be to shop for discounted products. The events didn’t start until around 9:30am, allowing us to shop for what we need first. Some booths are obviously more popular than others (i.e. MAC Cosmetics, Make Up For Ever and Nigel’s Beauty Emporium are notorious for being incredibly jam packed). 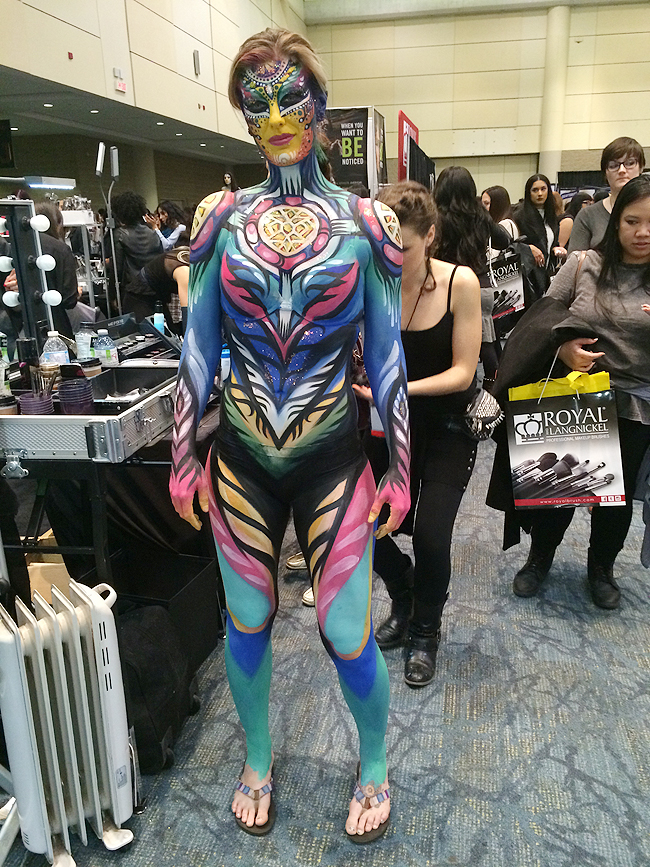 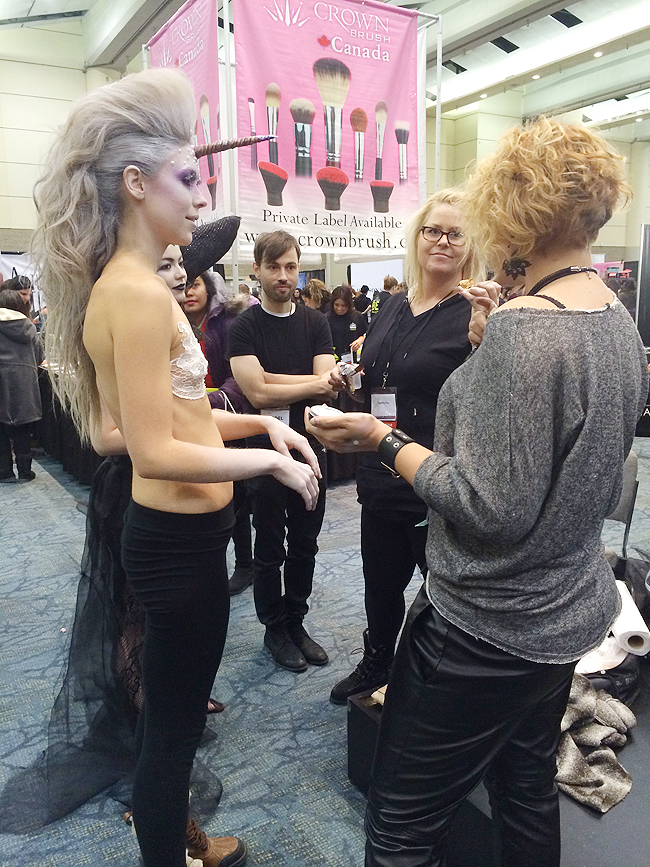 Make Up For Ever Body Painting // TEMPTU Pro Unicorn Girl

I loved seeing all the creativity and such intricate techniques used to create some of the looks and effects. I studied Business and Economics in university, and that didn’t allow for much creativity or colours in my life (except for red and black – accounting students understand what I mean!) Seeing all these unique tools, and colours work so cohesively and the sheer creativity of looks and effects created were so impressive to me.

More Pictures from the IMATS Toronto 2014

As soon as we got in, I made a beeline for several booths but had a moment of panic for not remembering what I wanted to get because of my forgetting my list at home. I know, I know. How did I manage to do that? Despite the wandering around, and finally deciding to squeeze my way into a booth, I managed to get everything I needed.

Here is a list of things I picked up at the IMATS Toronto 2014:

My first stop ended up being Nigel’s Emporium which was packed with people shopping for lashes. The booth was small relative to the number of people trying to shop there. I managed to barely squeeze in and ended up purchasing the Kevyn Aucoin Skin Enhancer S05 which costed $32. I had second thoughts about purchasing the ZPalette at this booth and I’m glad I didn’t get it because I managed to find it cheaper at another booth.

The crowd at the MAC Pro Booth

The second stop was MAC Cosmetics where everything was 20% off. They had everything from lipsticks, blushes, foundations, concealer palettes and select skincare products from the permanent range as well as select pro-only shades/product. Though the process of selecting and picking up the items we wanted was relatively quick and easy, the line up to pay was ridiculously long! I think I stood for 45 minutes waiting to pay. In the end, I purchased two of the MAC Pro Palette ($8), the MAC Mineralized Skinfinish Natural in Light Plus ($29.60) and MAC Eyeshadow in Vex ($9.60).

After the MAC Cosmetics booth, I tried to squeeze my way into the Make Up For Ever booth which carried most of their range including the new Artist Shadow (select shades), Artist Liner, Aqua Eyes, as well as Aqua Matic. However, as obviously expected from a brand as popular as Make Up For Ever, the crowd was far too intimidating for me to squeeze through. In the end, I gave up ????

I also wanted to stock up on my favourite eye brushes from Bdellium – the #776 Blending brush ($5) has been a staple of mine for years now, being such an amazing dupe for the Sigma E25 Blending Brush which happens to be one of my favourites. Given that each brush was only $5, I bought 3 to last me a while. I also purchased the #959 Powder Blending Brush ($10) – I love how soft it is and feel that it can be a very multi-purpose, functional brush!

I stopped by the NARS booth and they had tons of their most popular products (NARS Audacious Lipstick, and Creamy Concealer to start off) and was doing a promotion where you get $10 off $75 purchase. Although I was super tempted to pick up a thing or two, I managed to walk away without buying anything. Mission accomplished!

From the BeautyFrends booth, I managed to score some deals! I purchased the ZPalette – Extra Large for $18, whereas Nigel’s Emporium had the large ones selling for $24. I also bought 2 Makeup Spatula, one being double sided, to use when depotting products for $3 and $4 each.

Lastly, as I was doing one final round before leaving the event on Saturday, I stopped by the Royal & Langnickel booth for the third time, and finally picked up the Royal & Langnickel SILK Complexion Brush ($12). As I was checking out, I mentioned that the lady at the booth said the brush was $9 (despite the sticker that said $12 at the back). The gentleman who was cashing me out said I could have it for $9 to make a customer happy – win! And I told him I’d mention it on the blog, so there you go! Thanks!

Let’s assess the damage shall we? I think I did quite well – I started out with a budget of $150 and a list (that I somehow managed to forget), but here is the breakdown of my IMATS Toronto 2014 wishlist vs. what I actually got.

Overall, I think I did quite well – I was only $7.30 over budget, and that’s because the MAC haul included taxes whereas the others didn’t. I was pleased to have limited my purchases to most of the items I had on my wishlist and only bought the stuff I really wanted to try! I’m really thrilled about being able to go this year’s IMATS Toronto and looking forward to future IMATS Toronto!

Partners in crime and each other’s disabler’s: Zubie from Zubie’s Musings

Seeing other bloggers at events like this is always the highlight! I met up with Zubie from Zubie’s Musings and we walked around together which was awesome since we agreed to be each other’s “disabler”. There were a couple moment of weaknesses from both of us, but I think it definitely helped to have someone telling you that you don’t need it!

Now it’s your turn! Have you been to IMATS before? What was your favourite part about the weekend? As always, I’d love to hear your thoughts! Share with me comment section or through Twitter or Instagram!

ugh i totally overpaid on the spatula i bought. you did great! (budget-wise)

Thanks Jenn! How much did you pay for the spatula? I had to walk around a little bit and finally snagged one for a little cheaper (I know other places were charging $8+)

Ah, you got some great shots of the special effects makeup and you picked up some fab products! So fantastic that you picked up and stayed so close to budget. Was great seeing you there! ????

Thanks Jen! Glad I saw you too!

Ugh look at my mug lol. I think you did a brilliant job at budgeting yourself. There were a few moments when we turned a blind eye at each other but, I believe we had each others best intentions at heart. (i know she really wants that second spatular lol) Heres looking to next year!

Thanks Zubie! LOL, you look FAB! This is the only picture I have on my camera/phone I think!! LOL I knew you would keep me in check (especially with tha Sunday text!) I promise there’s no second part of the IMATS haul coming!

Just wondering if Mac, MUFE, Frends Beauty and Nigels was charging tax? Im going this year so doing some research. Are you going?