Among the products from the Guerlain Les Tendres 2015 launch, the GuerlainMeteorites Perles de Blush Angelic Blush ($58, available here) caught my eye almost immediately. Nothing gets a blush addict’s heart going faster than a high quality, impeccably packaged, and too-beautiful-to-use blush. In the Les Tendres 2015 collection, the GuerlainMétéorites Perles de Blush Angelic Blush had absolutely zero competition. Fronted by the lovely Russian model Natalia Vodianova, this blush is all about that glow-from-within, with the softness of a baby’s skin, cheeks. 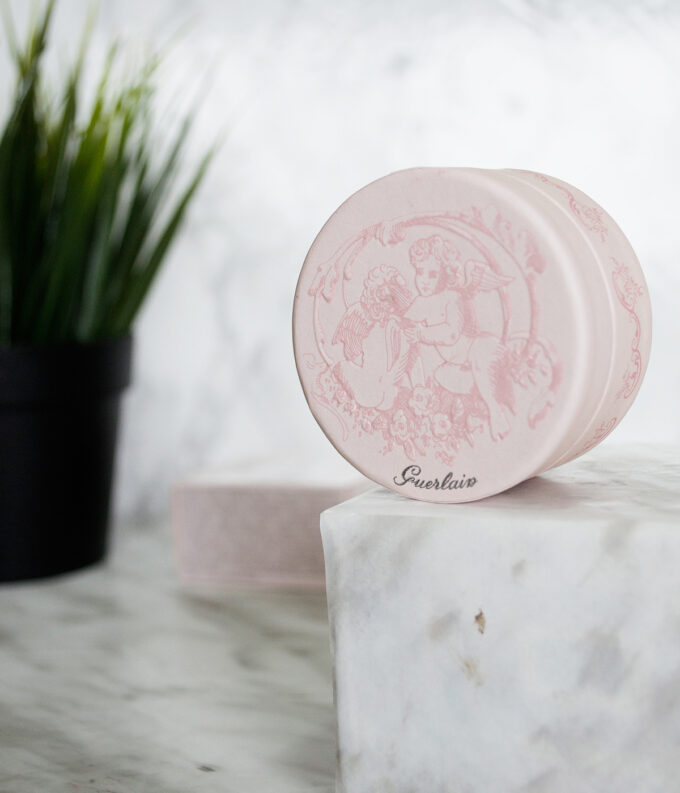 The Guerlain Météorites Perles de Blush was inspired by the original Guerlain Météorites Perles which has become somewhat of a cult product over the years. The Météorites Perles is supposed to impart a (heavenly) glow all over or placed strategically to highlight one’s features. Difficult to capture on camera, it is one of those products that you really have to try to appreciate. And no, I don’t think you can ask for a ball or two as samples from Sephora (if you’ve successfully tried this, let me know!) The way the Météorites Perles is supposed to work is subtly add that glowiness, skin-looking-nicer and your skin but better kind of look. Sort of a precursor to the now famous Hourglass Ambient Lighting Powders. 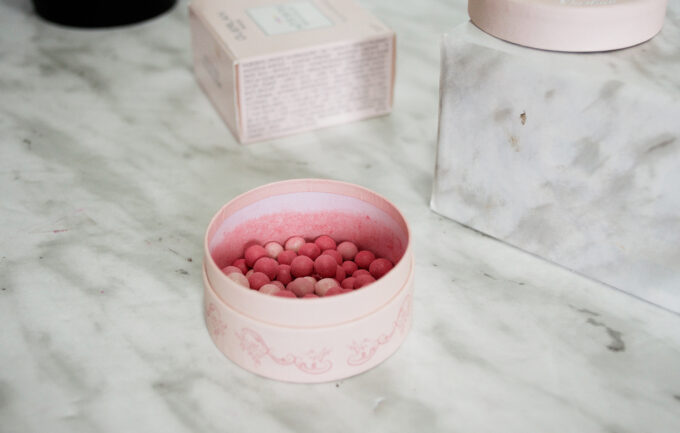 The Les Tendres 2015 is the first to showcase and feature this blush. Encased in a blush pink, vintage-inspired cardboard packaging, the GuerlainMétéorites Perles de Blush Angelic Blush is the centrepiece to any vanity. The letterpressed cherubs on the top of the lid is a unique touch. While the cardboard packaging may make some indignant given the price, I think it’s quite novel though it will have a special place on my vanity, away from the rest of my (colourful and unforgiving) makeup. Everything about this blush screams delicateness, and invokes post-Edwardian England memories (Or maybe I’ve watched Downton Abbey one too many times).

I feel that the Météorites Perles Blush is something of a collector’s item, and something to display on the vanity – it’s one of those that makes an Instagram picture look that much better. Despite the hefty price tag, one that will last a very, very long time. The blush, while pigmented, blends naturally into the skin, so you don’t really have to work that hard at blending. I get it, with a price tag like this, the only thing you want it to do is self-apply (I wish!)

Physically, both the packaging and blush balls are smaller than the regular Météorites Perles. For your reference, the blush is 13g. A powder puff is provided, though it is not the luxurious, pouffy type that comes with the Météorites Perles. The puff seems to be designed as a barrier between the balls and the lid rather than as an applicator. In any case, I prefer applying the blush with a brush anyways.

The balls come in three colours, fuchsia to revive the cheeks, iridescent champagne to highlight and a hint of petal rose to refresh. The three colours work differently to achieve a cohesive result that the Météorites Perles range has become known for. The fuchsia, is the most dominant colour, works to add colour. The iridescent champagne, as the name would suggest, works similar to the pearls in the Météorites Perles, giving the face that soft focus, and lit-from-within glow. Lastly, the petal rose works to brighten the complexion.

From the swatch, you can immediately tell that this is one pigmented blush. Combined, the colour is a soft pink that looks flattering on a variety of skintone. I use two methods to apply the blush, depending on whether I’m being pressed for time or not. The easiest way is to lightly swirl your blush brush (I use the Real Techniques Blush Brush) through the balls lightly, and pick up a little of the leftover powder at the bottom. Another method is to shake the packaging lightly with the sponge inside, so the pigments get picked up by the sponge. I then use a brush to pick up the colour from the sponge. I wouldn’t use the sponge directly as it would leave too much product on the cheeks!

using the sponge directly has worked ok for me. yea it does pick up a lot but i find it also blends out quite well.

Ooh, it looks angelic, indeed! Definitely ultra tempting and so pretty for Spring ????

One of my favourite blushes for sure! So unique and different from any that I currently own =]

These are so pretty! I’ve been tempted by the regular meteorites but can’t justify them. I’m just not impressed with finishing powders. But a blush! I love blush! I wear blush! Is the formula worth the price tag or is it more about the looks?

Swoooooon. This is so gorgeous. I really can’t handle it. So pretty. I want it.

CRYING…HOW THE FRICK IS THIS SO PRETTY?!?!?!?!? ;-; (PFT, forget asking Sephora, I’m just going to casually steal a ball….jk…maybe)
Kinda glad I’m only buying cruelty free products now, because this product would cause massive damage to my wallet. -sigh-